Manchester of the Aegean

Walking through the streets of Ermoupoli, capital city of Syros island, is a treat for the eyes. Marble-paved streets surround a grandiose city square, while elegant mansions and public buildings seem to compete in a beauty contest of neoclassical style. And yet, if this glamorous facade exists, making its people proud of their island, it is because of a less prestigious -but nonetheless iconic- landmark stretching west of the port: Syros’ historic shipyard and industrial zone.

Back to the early 1820s, when Greeks from all over the country were fighting against the Ottoman rule, Syros, traditionally under the French protection, provided one of the few war-neutral areas. With a port safe from winds and fire-guns, Syros emerged as a promise-land for hundreds of Greek war refugees determined to rise from the ashes.

In the shipyard of Ermoupolis, newcomer seafarers and merchants found a commercial fleet destroyed from the naval battles and were set to reconstruct it. Gifted with a business-oriented mind, they built ships to fuel the war with wheat and guns. This gave them the necessary funds to expand their fleet and lay the foundations of their own industrial production. The craftsmanship methods that they brought from their homelands enriched the island with a know-how indispensable for producing top-quality products -from cotton fabrics and glass to oil-based paints, tanned hides, and tasteful sweets. Soon, they opened up to the international markets, increasing their exports to places as far away as Marseille and Manchester -the original one.

In just a few years, Syros’ ships and factories were able to draw a new trade map in the Eastern Mediterranean, placing the island right in its center. Alexandros Moraitidis, a 19th-century Greek travel writer, reminds us that, in the turn of the 20th century, Syros was referred to as the “Greek Manchester”. Quite rightly: in an agricultural country that remained untouched by the industrial revolution of the West, the vast premises of Syros’ factories were counting hundreds of workers. This workforce scale was still unknown in Athens, Greece’s new capital city. In his travel notes, Moraitidis walks us through the noisy workshops of a steamship shipbuilding company, a tannery and a weaving mill; their sophisticated cog wheels, dryers and looms were weaving, thread after thread, the island’s economic glory.

Later on, another Greek writer, Rita Boomi-Papa, describes a typical day in the life of a ship worker. For years and years, hundreds of islanders would wake up before dawn and walk for miles to reach the shipyard, with a tablecloth poke hanging from their arms. Every night, their wives would put all their love into preparing their husbands’ meals, wrapped in a freshly cleaned cotton poke: a humble piece of bread, an onion and some olives was all they used to have for lunch. It was with the same care and humbleness that entire generations of workers and craftsmen dedicated their lifetimes to the shipyard; in just 30 years, they managed to build over 4.000 ships establishing Syros as a naval superpower.

"This is the Manchester city of Greece, where factory chimneys stand in line, like minarets of life and work."
Alexandros Moraitidis, On the Waves of a Northern Wind, 1902.

Today, let’s take a good walk in the city of smokestacks; in this city where factory chimneys of the Greek Manchester stand in line, like minarets of life and work.

Walking beyond the coastal road […] our eyes will meet with amazement the grandiose factories of the steamship building company, splendid in the richness of the machines. In the various compartments, between buffers and cogwheels, under the thump of the iron machines, in the middle of thundering clunk sounds, engineers, workers and apprentices construct all the engines necessary to power a steamship; a bit further, in a quieter room, lathe operators and craftsmen construct all the recliners of a comfortable passenger steamship using noble mahogany wood; they also work on the sculpted cabin doors and other decorations. Outside, at the big dry dock, one can notice a colossal steamship, tall like a mountain and hard to walk up to, waiting to be cleaned before she resumes her journeys. 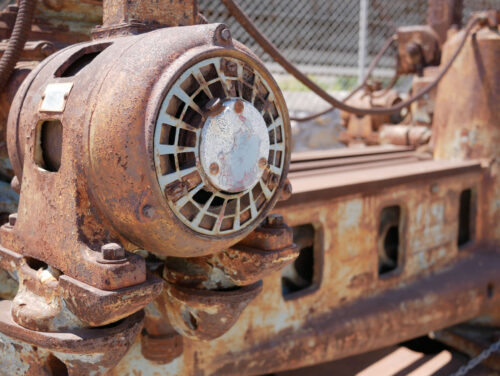 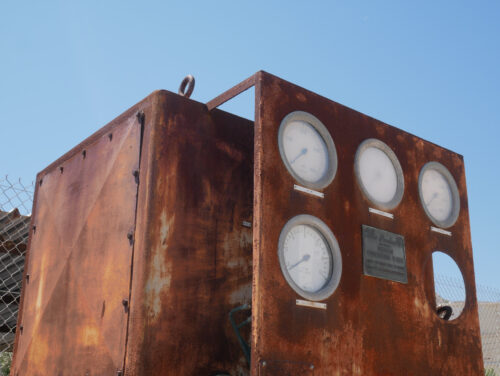 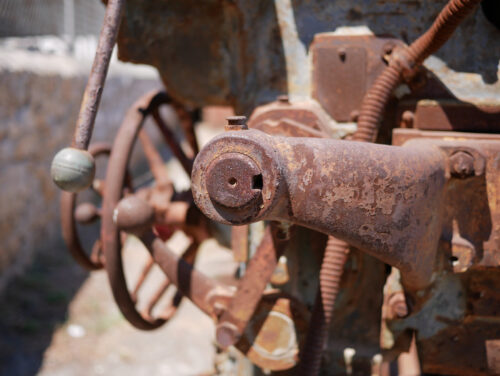 Further down our walk, we cross two grandiose tannery factories, famous in Europe, featuring all the necessary machinery and tools for the treatment of leathers: they are equipped with courtyards, halls, washing machines, dryers, tanks, and basins to wash the raw material, most of which comes from South America where cows abound. Workers are sit in a corner, eating bread and grapes for lunch –it was Wednesday, a day of strict fasting. These two leather factories are like a city within the city, exporting various types of leather across the country’s mainland, the islands and the coasts of Anatolia […]. Both are covered in golden medals and awards from several European Expositions. […] Numerous are the workers, over 150 for each tannery department, all coming from Crete and Chios islands. […]

When we came closer to the great weaving mill of Nostraki and Andreopoulou, a pleasant melody coming out of the factory reached my ears, as if a big celebration was taking place. It was the song of the working girls who, during their break, were training in this harmonious melody. This melody is the well-shaped comfort of work, which replies so sweetly to the gloomy and shameful idleness, that Hesiodos first shamed in the old mythical years.

The grand weaving mill of Ladopoulos is the most admirable sight of all. It is the only factory of this kind in Greece and in Asia Minor. The factory features no less than 65 steam-powered looms, managed by 300 young ladies. They worked 7 hours per day and produced around six thousand cubits of cloth that turned into splendid towels, sheets and other magnificent pieces of linen.

Alexandros Moraitidis, On the waves of a northern wind, 1902 in Manos Eleftheriou, Syros in literature, Metechmio, 2003.

A day at the shipyard

At that time, our city was blooming in its commercial prosperity and nautical glory, its cultivation and opulence. […] Amphitheatrically built, the city could bedazzle even the worldliest of travelers with its beauty, at first sight of the island’s big port.

A noisy port, filled with ships of all sorts of flags. The streets were crowded and a roar was mounting from the loud voices of boatmen; from crowds loading and unloading boats; from coffee sellers, fishermen, newspaper sellers who were shouting out headlines or other decrees of the authorities.

The roar was coming from the docks and going up the streets. Even at dusk, that din that came from the port –but sounded as if coming from the sea- could not calm down.  On the contrary, it was getting louder by the crowds, who, instead of going home to rest, were pouring out of every street, all heading to the city center. […]

“Greek Manchester” was the name that Syros was given by the foreign cotton importers; in its famous shipyard, where both my grandfather and father were master builders in a mob of around a thousand workers, thousands of top-notch sailboats were constructed and rigged. Between 1834 and 1864, Syros’ register counted 4.103 ships, almost all of them built in its shipyards; and the revenue from its Customs with their huge warehouses could cover almost all of the expenses of the newly formed Greek State.[…] 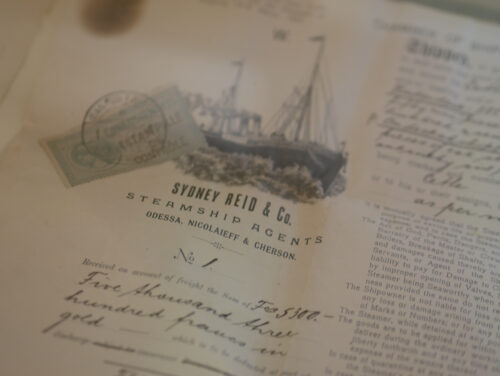 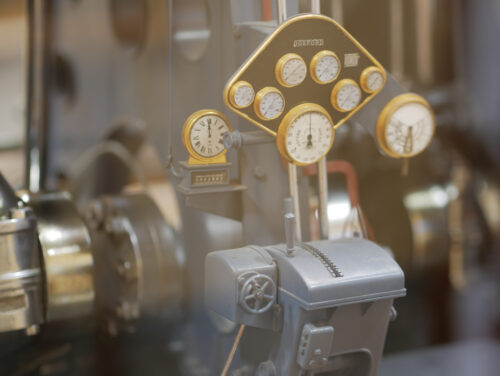 In the meadow of the shipyard, where the whistle of the wind dispersed the laughter and voices of over a thousand workers, many of them were singing songs from the land that gave birth to them.

There you could hear Kleftika songs from the Greek mainland (note: 19th century guerilla songs); Amanedes from Anatolia (languishing songs singing sorrows); Cantades from the Ionian Islands (Romantic songs of Venetian origin, sung under the balconies of ladies); and Mantinades from Crete (recitation of poems or dialogs, sung in the rhythm of accompanying music). […] 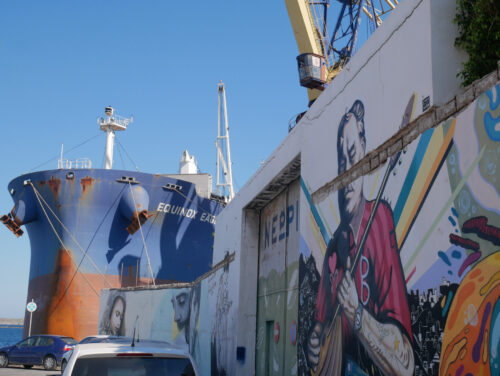 All these hard workers were spending all day at work. From 6 o’clock in the morning through dusk. The sun was their clock. As their homes were far from work, it was impossible to join their families for lunch. Except on Sunday. That’s why they would bring their breakfast and lunch from their homes, wrapped in a denim towel tied with a knot: half-a-pound rye bread; a handful of olives; an onion or two; a piece of halva cake; and, from time to time, a few crumbs of touloumotyri, the cheapest cheese in the world. And a jug of water, also brought from the house, resting in the shade of the keel, to protect it from the warmth of the sun. The tidiest ones were eating with a fork and a spoon, and had ceramic pots to place their legumes or greens, all cooked at home the night before.

This is the shipyard where, in 1879, the first and second big strikes -in the Greek history of strikes- broke out and shook the entire country, startling employers, bosses, rich people, even kings!

It was not just the shipyards. Other industries also followed their lead. Dozens of factories occupied the population. Thousands of workers. In the tanneries, where they buffed the animal skins, in the spinning mills, in the glass factory, in the countless workshops of emery, socks, towels, boxes, brasses and the factories of clothes, shoes, shirts, hats […].  The trade and production were heating up. Ships were getting loaded and unloaded at an endless pace.

Explore the island's industrial heritage through landmarks, museums and places to eat.

More from the Greek Islands