Let us take an imaginary trip back to the summer of 1843; and let us suppose that you are in Greece, on a mission to explore the islands of Cyclades. The sun burns like hell. A sunset or two find you in Delos, sitting by some ancient ruins, scattered here and there, reading Homer or Shelley. You hop on a boat again and sail off to -what you think will be- another island lost in its past.

As the captain struggles to reach the shore, you notice a harbor packed with boats of all sorts and sizes. You lean on the rail to look at the swarm of people crowding the quay: merchants scream to advertise their groceries to buyers who bargain for the best price. The boat finally moors and you make your first steps on dry land. In the air, there is a smell of fish, tobacco and freshly cut coffee. Traders speak different dialects but they all smile at you, in the hope of charming you to their stalls. Welcome to Ermoupoli, capital city of the island of Syros.

Though older than Homer, Syros wrote history during the 1800s, when Greece was fighting a war of independence against the Ottoman Empire. At the time, a series of pogroms caused a large migration wave from the Eastern Aegean and the Turkish coast: hundreds of Greeks from Smyrna (today’s Izmir), Chios, Samos, Psara -among many other places- found a new, safe homeland in war-neutral Syros.

The newcomers, most of them merchants and sailors, had not much to lose. With their mind set on business, they took advantage of the island’s strategic location, right in the middle of the Aegean: a sea that has served, for centuries, as a bridge between European merchants and Asian markets. They built their first ships to provide the war with wheat and ammunition; soon, they doubled their fleets, constructed a new port, expanded the shipyard, modernized the customs building, and turned Ermoupoli into the biggest commercial and industrial hub of the Eastern Mediterranean.

The island’s growth considerably improved the living standards of the locals: new, large commercial streets were paved with marble for ladies to parade their delicate heels and for gentlemen to walk their polished loafers. Eminent architects from abroad, such as Ernst Ziller, were commissioned to design opulent buildings. Their grandiose architecture was more suited to a metropolis of the West, than to a small island on the edge of Europe, in an area where the latest urban plans were going back to the Middle Ages.

French and English writers started visiting the island around the 1850s, curious to see with their own eyes that “miracle” everyone in Greece was talking about. The town of Ermoupoli was already becoming a melting pot of civilizations, “a real Pan-Hellenic mosaic” as writer Georgios Mazarakis noted in his travel journal.

Théophile Gautier, one of the renowned visitors of the island, draws the vibrant portrait of a city in full bloom: a metropolis with quays shaken by the tradesmen’s shouting; where well-dressed waiters served Italian-style gelatos in French-style cafés; and violins played opera arias to patrons dressed in velvet and silk waistcoats.

With a port receiving up to 120 steamships a year, the island was offering a worldly market, one of the richest in Europe. In one short walk, people could find all kinds of food, spices and multi-ethnic condiments; they could choose a Venetian lace or a fine English tweed for the next city ball; or they could freshen-up with rosewater before sitting at an elegant French-style café to enjoy a beverage. In his marvelous novel, The time of chrysanthemums (Ο καιρός των χρυσανθέμων), Greek writer Manos Eleftheriou invites readers to some of the finest boutiques that bejeweled the shiny streets of Ermoupoli, the cosmopolitan Queen of the seas.

In the morning we reached Syra. When seen from the harbor, Syra looks a lot like a smaller-sized Algiers. […] A great number of vessels of all shapes and sizes brought their black sails against the town’s white houses and crowded along the edge; canoes came and went with joyful passion: water, earth, sky, everything was overflowing with light; […] Boats were heading towards our vessel with the forceful use of rows, forming a regatta of which we were the focal point.

Soon the deck was filled with a crowd of big strong lads with tanned skin, hooked noses, flaming eyes, and ferocious mustaches who offered us their services as if they were asking “your money or your life!” […]

The quay is lined with shops of all kinds: fishmongers, butchers, confectioners, cafés, restaurants, taverns, tobacco shops etc. forming a lively picture. There’s a perpetual swarm of a colorful world of sailors, porters, buyers and curious people from all countries and all costumes.

We can almost touch the boats from the shore, and the shore coexists with the sea in the most intimate familiarity. Nothing is more fun and more picturesque […].

Worn-out from all the noise, we looked for a place to rest, and headed to a café equipped with reclining chairs outside -as people in Syros spend their time outdoors. We were served lemon gelatos, largely superior to the ones at Tortoni and equally delicious as the ones served at the Bolsa café in Madrid. […]

When we had sufficiently contemplated this admirable spectacle, we let ourselves roll in an avalanche down to the city, and ended our evening at a dance floor al fresco, overlooking the sea, smoking cigarettes and sipping on a glass of lemonade, while listening to a band of Hungarian musicians performing extracts from Italian operas.

A few women, dressed in French style, were walking along the embankment with their husband or fiancé, past a plethora of tables and chairs; on the latter one couldn’t miss the fustanelle (note: a traditional pleated skirt-like garment) of the lads who were drinking coffee, or making bubbles in their hookah.

In front of us, the sea was glowing by the ships’ lanterns; behind us, the lights of Syra scattered the purple mountain with golden specks. It was lovely.

Syros is one of the most important trade centers of free Greece, and its population is a melting pot. A real panhellenic mosaic, where one could meet a person originating from Acarnania (note: a region in west-central Greece), next to a former citizen of Constantinople, next to a fellow from Tripolis (note: a city in the Peloponnese peninsula), another one from the Ionian Islands or Chios […]

Everywhere (there are people) working, struggling and striving to achieve their goals. […] They have faith: not the inert faith of a fatalist who waits for fortune to come to him; but the lively faith of someone who doesn’t ignore the fact that the mountain never goes to Mohammad, and who depends only on himself […].

Four months before leaving the island forever, Mr. Pinas decided to take some time off and stroll about; he thought of visiting the store of the famous photographer George Pangiopoulos. He could consult him about what he and his wife should wear to get the best pictures they had ever taken. […]

Mr. Pinas arrived at the end of the uphill street. Here, the noise of the city stops abruptly. He had reached the borders of another world. At the corner, there was the pastry shop of Efstathios Kounavis, baker of the famous cookies from Smyrna (note: today’s city of Izmir, Turkey): they smelled of rosewater and burned sesame. An entire island used to buy its candy there for weddings, christenings, funerals and other types of ritual food. 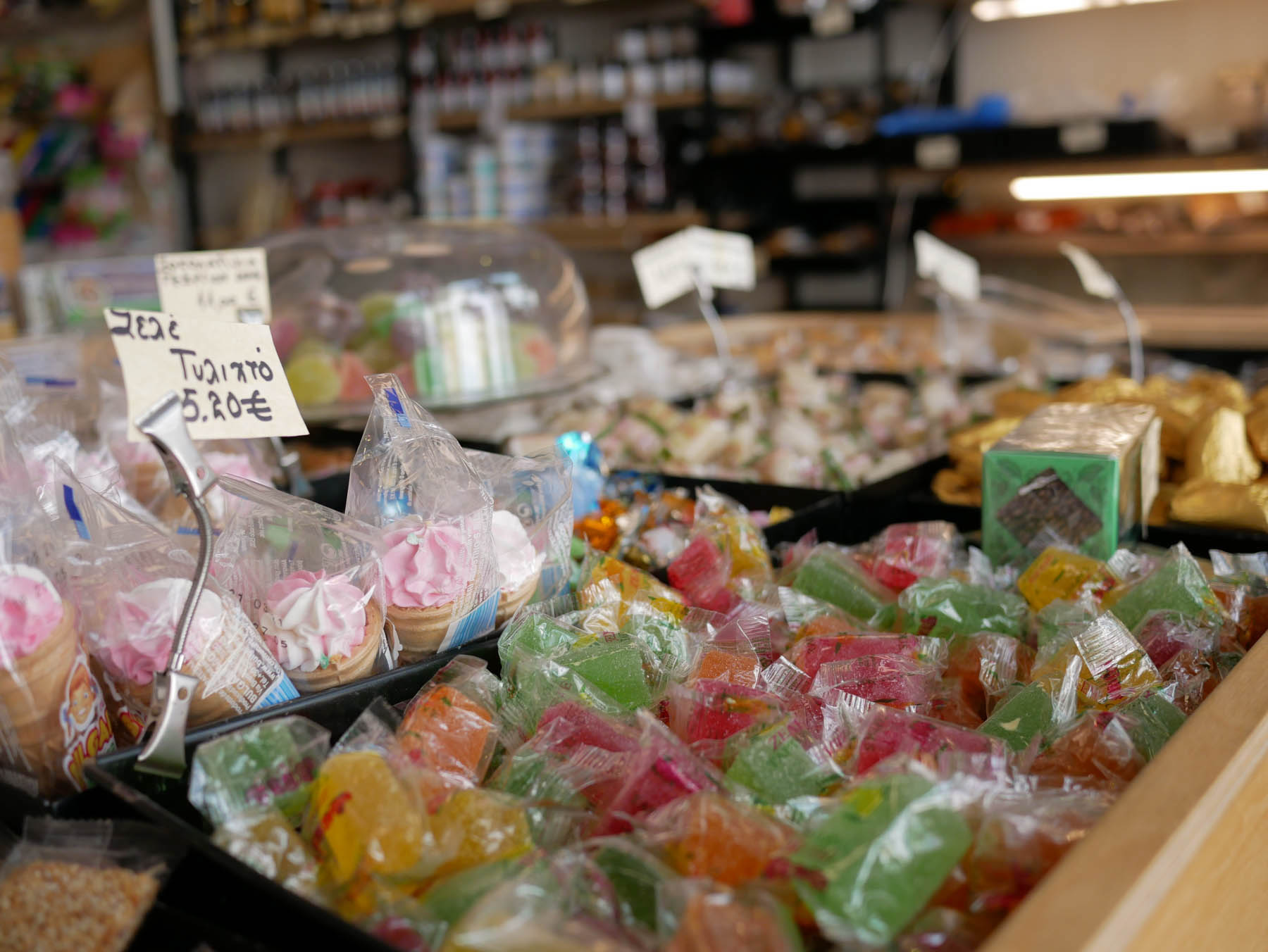 Next door was the fashion house of Nikiforos Neochiritis with a window display featuring two boned male mannequins and some faded Parisian fashion journals. On the shelves of the store, the most refined English fabrics, – wrapped with care in blue cloth to protect them from discoloring and dusting, and with small bags filled with lavender for the moth -, were waiting for enthusiastic patrons.

Third in line was the store of Eliza Valvi. Here, every day, apprentice dressmakers were working on the latest samples of fabric and buttons sewed over a colored piece of paper, with their price tags pinched on. Besides Elisa, four other girls were working there, making belts, buckles, pink and light blue clothes for babies and mostly hats, under the vigilant eye of Mrs. Fervonia Vaka, Elisa’s older sister.

Together with their third sister, Aspasia, and her son in law, they travelled almost every twenty months in Europe. From there, they would bring laces for wedding gowns, silk scarves and socks, silver candy boxes for weddings, flowers made out of paper, velvet, brocade, felt for the women’s hats, ribbon and piping for the dresses, bottles with detergent for cleaning the silks, big brooches for fixing hats on the hair […]. Their window display, surely the most beautiful in town, was featuring a beautiful bride wrapped in organza and lace, standing on a carpet of enamel flowers. 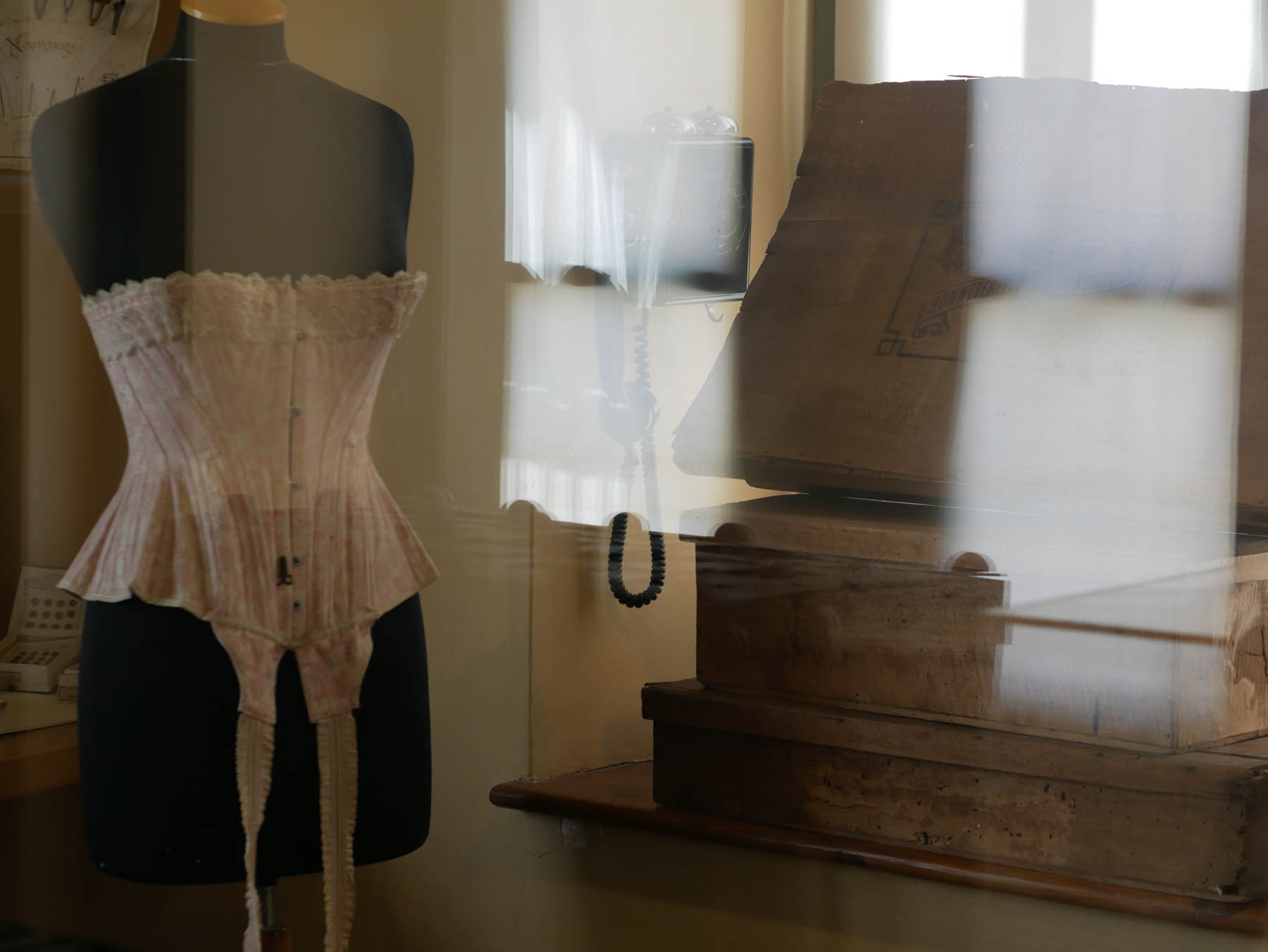 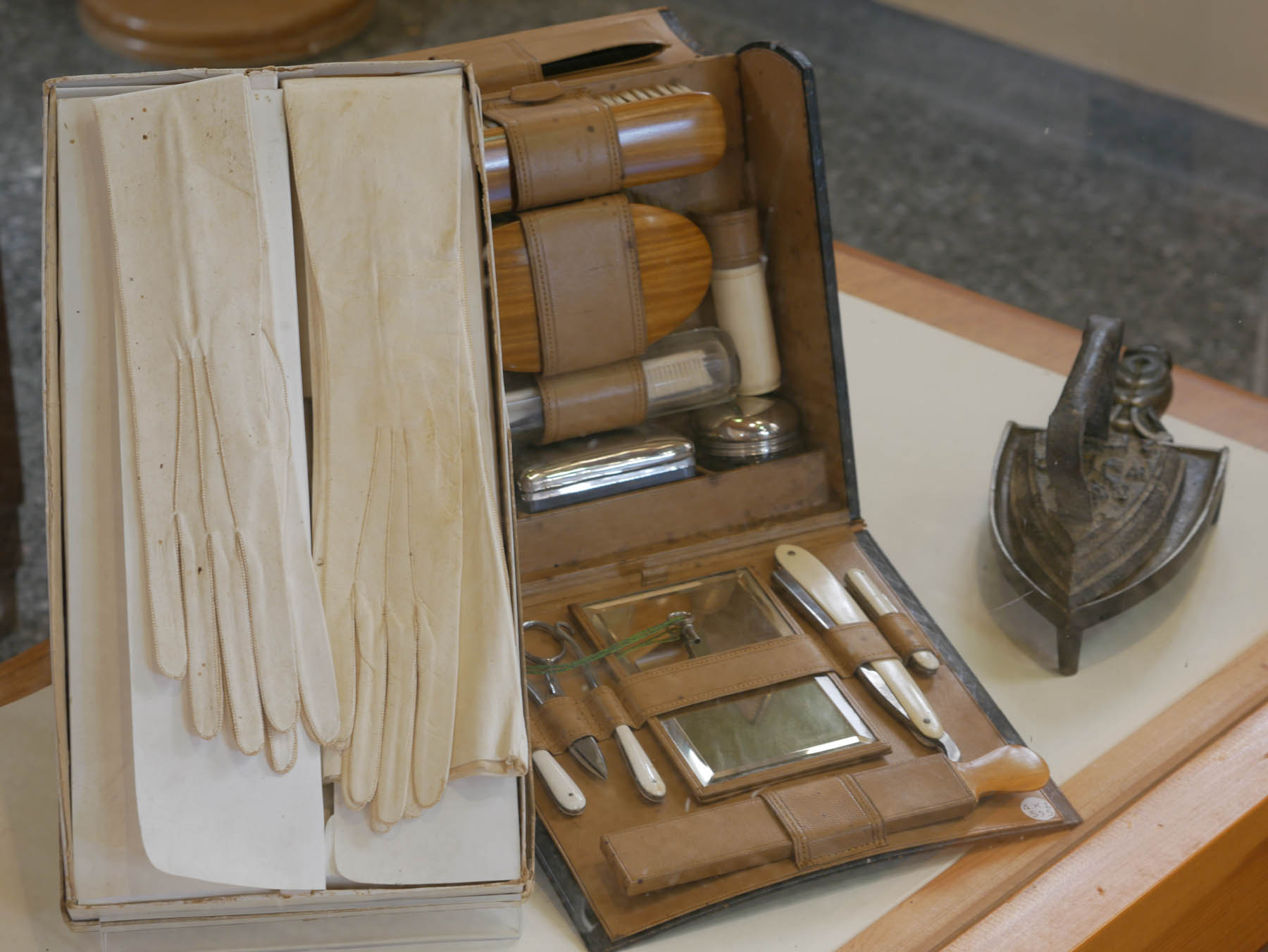 Next in line was the perfume store of Isidoros Malatestas. A slim, solitary, poorly-traveled, and always elderly-looking gentleman nestled deeply in some dark, humid basement of the city. He was always wearing the same black suit with the thinnest white stripe and a bow-tie with a pearly white collar.

The street always smelled of lemon and rosewater: the perfumer would not let anyone pass by the store, whether he knew them or not, without inviting them to drip one or two refreshing drops on their palms.

At the back of the store, there was the laboratory with huge, shiny brass cauldrons and ovens that perfumed the atmosphere with their smoke […]. His nephew […] was sticking carefully multicolored tags with beautiful gold print on elaborate crystal and glass bottles […], then placing them in special boxes to be shipped across the country.

Next, there was the candy store of Evdokimos Pregkas, famous for his candies, their original designs, their colors, and of course, their taste. Twice a year he made spoon sweets (note: fruit-based sweet preserves, served in a spoon as a gesture of hospitality) out of grapes, quince and aubergine. He disliked arguments and did not care to bargain. If a client manifested the smallest hesitation or sneer because of a high price, he was capable of withdrawing the products immediately.

Check-out some of our favorite food markets in town.

More from the Greek Islands